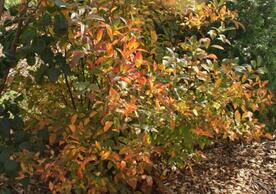 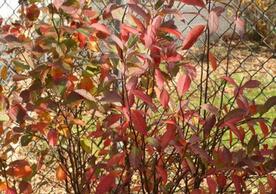 So fall color is variable, we get that. The weather is a big factor, soil chemistry and insect predation enter in and of course genetics have a say as well.  Just as paper will not refuse ink, the ether will not refuse data: this means that you will find claims made about the fall coloration of plants that are hard to put your money on reliably.  Terms such as ‘electric’ and ‘glowing’ are very hard to quantify, and even the colors mentioned in some catalogs and on line could be disappointing in reality. Questions arise: Did I plant it in enough sun for it to color up? Did I fertilize/water/prune it correctly?  Is this really the plant that I thought I was getting? The lesson that I, the Guide on the Side as opposed to the Sage on the Stage, would give you is this: If you want fall color and it’s that important to you, go to your local nursery in the fall and buy one that you see there with the autumn coloration that suits you, whether it’s to match your curtains, your budget or your roadster. Or all three.

One plant that I have had color up every year as reliably as a Southern belle in a room full of smooth talkin’ Yankees is Virginia Sweetspire . I love the plant for its fall color, but it also has a distinctly sweet summer bloom and it is also a problem-solver.   No, it won’t bring your electricity back on after Sandy blew through. You just have to wait till all the customers in Fairfield County get taken care of, THEN us folks in Hamden, Bridgeport and East Haven will get our lights back on. Oh, and after Branford, Guilford and Madison. Probably Cheshire too. On Tuesday, there were 3 UI trucks and a supervisor’s vehicle on St. Ronan’s Street, and those in New Haven will know exactly what I’m getting at. But anyway, by problem solving in the plant world, I mean a plant that will serve several purposes in a difficult environment.

Itea is native to wet woodlands, swamps and along streams in the southeastern United States, from the Pine Barrens of New Jersey to the piney woods of Texas, with all the states in between, including the swamps of Florida. Do you get the impression that this plant likes water? Like a prospector back in town from months on the claim, Itea relishes a good drink, and therein lies part of its problem-solving charm.

If you have a wet spot (and we here at Marsh Botanical Gardens have several), you can’t find a better denizen to fill in beneath the River Birch, nestle amongst the skunk cabbage or tower over the cress.  Itea’s height, depending on variety, will be three to six or maybe eight feet tall. It’s habit is a suckering shrub, as it sends new shoots out from the root mass, creating a colony that slowly enlarges to cover an area about four to six feet wide. It does this in what I view as a restrained sort of ‘playing nice’ sort of way, without actually running around like a crazed bamboo with its hair on fire.  It will eventually achieve a nice drooping countenance as the branches swoop towards the ground.

Itea blooms in late June into July, sending up three to six inch (perhaps eight in some cultivars) racemes. These are clusters of small flowers in a spike arrangement with each flower held aloft by a short stem called a pedicel, for you Scrabble players.  The flowers are white and beloved by bees and other pollinators.  They appear on the end of short leafy twigs, and are borne on one-year old wood. This means that you prune Itea after blooming, lest you prune off the coming flower-set.

There is nothing like a nicely placed Itea for fall color. As with most plants, full sun is best for full flowering, as well as good fall color.  Itea will tolerate and look quite good in light to moderate shade, but sun is best for full effect. There are many varieties of the plant to choose from, most having to do with size of plant (some are smaller than type), size of flower (some have larger flower spikes) or fall color. From deep wine red to orange sunset,  (there I go doing it myself: I never said I wasn’t guilty of hyperbole, says the kettle about the pot) the late October/early November color stands out in the garden.

As an accent planted for summer and fall interest, included in the bog garden, planted en masse to hold a stream bank or hillside, as a front-of-shrub-border beauty or just near the beehives, you can’t go wrong with Itea. Available usually as a small plant in a container, you can find them at most garden stores, and I just happen to notice some nice ones at Van Wilgen’s when I was there recently, and of course Broken Arrow Nursery in Hamden has extended their fall sale. Can’t wait to get up there myself.

Plant in full sun to light shade, wet to dry soil (for a water loving plant, just like that prospector mentioned above, Itea is surprisingly drought tolerant), and enjoy many years of summer bloom (when not much is going on in the shrub border by the way) and a great autumn show.

Captions and Disclaimer: Below are the original captions and the disclaimer that I published and sent out as an e-mail.

Plant of the Week and Liquid Sunshine are my way of ignoring the dark cold house that awaits me tonight, many thanks to the ‘lectric comp’ny. Please send electrons to help those in need. Good wishes and a warm shower would be just as welcome. Neither Yale University, Marsh Botanical Garden nor the guys wearing tweed jackets with leather patches on the elbows have any connection, implicit or explicit to the views and opinions expressed within.

This Itea was supposed to be ‘Henry’s Garnet,’ but it hasn’t shown the truly claret coloring during the fall that the variety is supposed to exhibit.  It is quite possible that fertilizing the rose nearby had something to do with this, but who knows?

Itea ‘Saturnalia,’ which of course I purchased based on the name alone. If it had been named ‘Bacchanalia’ I would have bought seven of them. More orange, yellow and rose in the fall are part of the charm of this variety, as well as the fact that it is supposed to be somewhat smaller than type.