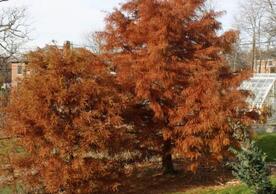 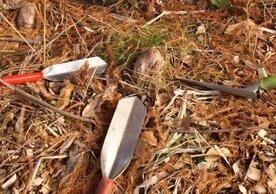 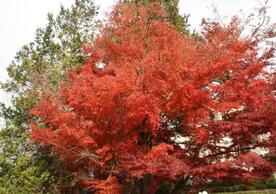 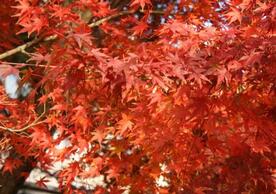 Most of the leaves have fallen, but there are an amazing number of ‘hangers-on,’ including our two plants this week. I was remarking recently about the late leaf drop this year: even Hurricane Sandi didn’t induce as much tree disrobing here.  We have had a rather mild fall, with one frost in mid-October and then a series of them this week. So perhaps the warmer weather has something to do with it.

I am interested in the succession of foliage coloration and leaf drop, looking for pairings of plants with complimentary color combinations that are fully on display at the same time. It’s difficult because some weather patterns may affect one species more than another, so one year you will find a well-timed combination and the next ,one has prematurely dropped its leaves or not colored up at all.  One combination that has worked well according to my meager observation is Flowering Dogwood and Witchhazel.  The deep red to purple fall color of the Dogwood and the clear yellow of the Witchhazel are wonderful contrasts and usually hit within the same week in mid- to late October.  I’d be interested in other folks’ observations along these lines, so if you have some ideas or suggestions, please send them along.

First of all, I’d like to make clear that these two plants are NOT one of these combinations I’m talking about, although they could be. The thing is that Bald Cypress and Japanese Maple tend to prefer widely differing conditions as far as soil moisture goes. We’ll discuss more on that later, but I wanted to make sure you weren’t planning to go out and move one or the other to accommodate my idea about fall color combinations. And actually I don’t think the colors work that well together.

Taxodium is a genus of only three species (depending on which taxonomist you talk to: it could be only two), all of which are native to the United States. The family is the Cypress family, Cupressaceae. The nearest relatives genetically speaking are both Asian genera, Cryptomeria and Glyptostrobus.  The genus name refers to the similarity of its leaves to Yew, or Taxus. Taxus plus the Greek word ‘eidos’ meaning ‘similar to,’ hence Taxodium.

Bald Cypress is native from the Delaware Bay south to Florida and west to Texas. Its range extends up the riparian districts of the Midwest, including stands in southern Illinois and Indiana along the Ohio River.  It will tolerate a wide range of soil types, but is most suited to the swamps or seasonally inundated soils of the south. Its cold hardiness is a matter of conjecture, as it seems quite cold hardy, but stands are not sustainable because of ice damage to seedlings in colder climates.

It is a relatively fast-growing tree, with about two feet a year possible in favored conditions.  They are pyramidal in shape with buttressed trunks, and the lower branches will droop to the ground. In old age, they will often take on a flat-topped irregular shape that is picturesque in every way. The attribute that brings it to our attention now is its lovely russet-red to bronze fall color, which lasts for weeks. So this is one of the deciduous conifers, along with larch, golden larch and dawn redwood.  (If it doesn’t have needles, it doesn’t necessarily mean it’s dead)

When growing in wet soil conditions, they develop ‘knees,’ which have not been reliably explained by the scientific community. Once thought to be associated with low-oxygen soils, as sort of air handling units, that theory has been debunked. It could be it has to do with stability. Indeed, with knees, interlocking roots and very strong wood, even hurricane-force winds do not knock them down.

They get big (well over a hundred feet by a third of that in width) so I don’t recommend them for the home garden. Under cultivation, you can expect one to grow to forty feet in very short order (I planted ours here at the garden as two foot striplings, and now they are over twenty five feet tall: that was six years ago). Full sun is best, and again, wet soil is preferred. They tolerate dry soil conditions, but they won’t develop knees and they will grow a bit slower in normal well-drained soil.

The wood from bald cypress is extremely rot resistant, light in color and easily worked.  Considered the ideal wood for greenhouse construction for many decades, it has also been used for shingles, pilings, furniture and decking.

Japanese Maples is a world unto itself. There are hundreds of varieties and cultivars of the species, reflective of the fact that in Japan, specialists have been selecting and breeding varieties for centuries. They are native to a wide range of eastern Asia, from Japan to Korea, China, eastern Mongolia and southeast Russia.

There is a huge variation in the species, with different forms, sizes, colors, leaf types and preferred growing conditions. They can range in size from two feet to over sixty depending on variety.  Some prefer full sun, while others are more adapted to a shaded environment. They all need good soil drainage to thrive, but only adequate fertility is necessary. An abundance of nitrogen fertilizer will result in some of the colored-leaf varieties fading to green, and also they develop better stem and trunk strength in lower fertility soils.

They seem to be the last to color up and then lose their leaves in the fall. This can be maddening if you are one of those groundskeepers who prefer to do the job once, but do it well. So while your oak and maple leaves are blowing around, you are tapping your foot like Marisa Tomei on the porch in My Cousin Vinny, waiting for the leaves of your Japanese Maple to drop, your neighbors have finished the task and the remnants of their leaves are blowing into your yard. Ouch.

The Japanese Maple belongs to the Maple family, Aceraceae, and was named by 18th Century Swedish doctor/botanist Carl Peter Thunberg for the hand-shaped leaves of many varieties. The first plants made their way to England by 1820, and have been a big hit in the horticultural world ever since. They are used for bonsai, focal points, in the shrub border, in pots and planters, in mixed plantings and as a specimen in the courtyard. They mingle well with other plants, both woody and herbaceous, deciduous and evergreen.